By day Rock Ola is a cafe in the North Laines of Brighton, but on Friday evenings it becomes something altogether different.

Being a student I rarely get to eat out. Earlier this month  a couple of friends and I had just been paid and fancied a break from cooking. We were thrashing out options of where to go when someone suggested “Rock Ola”

Naturally everyone stopped in their tracks and wondered what a ‘Rock Ola‘ is. We were enlightened when they explained that it was a b.y.o.b burger joint (£1 corkage) Quickly we booked a table over Facebook and made a beeline to Aldi to grab a few knock off lagers.

When we arrived we were impressed by the décor, it resembled an American diner and created a really fun atmosphere… It even had a free to play jukebox!

After numerous Pulp Fiction references we looked at the menu. There was a lot of choice, it wasn’t JUST burgers, but did specialise in them. The monstrous Elvis burger ( Which weighs in at over a kilo) caught my eye, although I was dissuaded by a couple of friends since it wouldn’t of been the best foundation to start a night out on.

Since it was 8 of us, it took a while for us to order. As soon as I saw a ‘fiery Mexican cheese and guacamole’ burger on the menu my mind was made up. The burgers also came with fries, which was refreshing to hear as we didn’t want any surprises when it came to pay.The waitress was great and attentive, she brought over glasses for our beers and gave some recommendations on what to order.

The food came out really quickly. I was very pleased with my burger, as pictured: 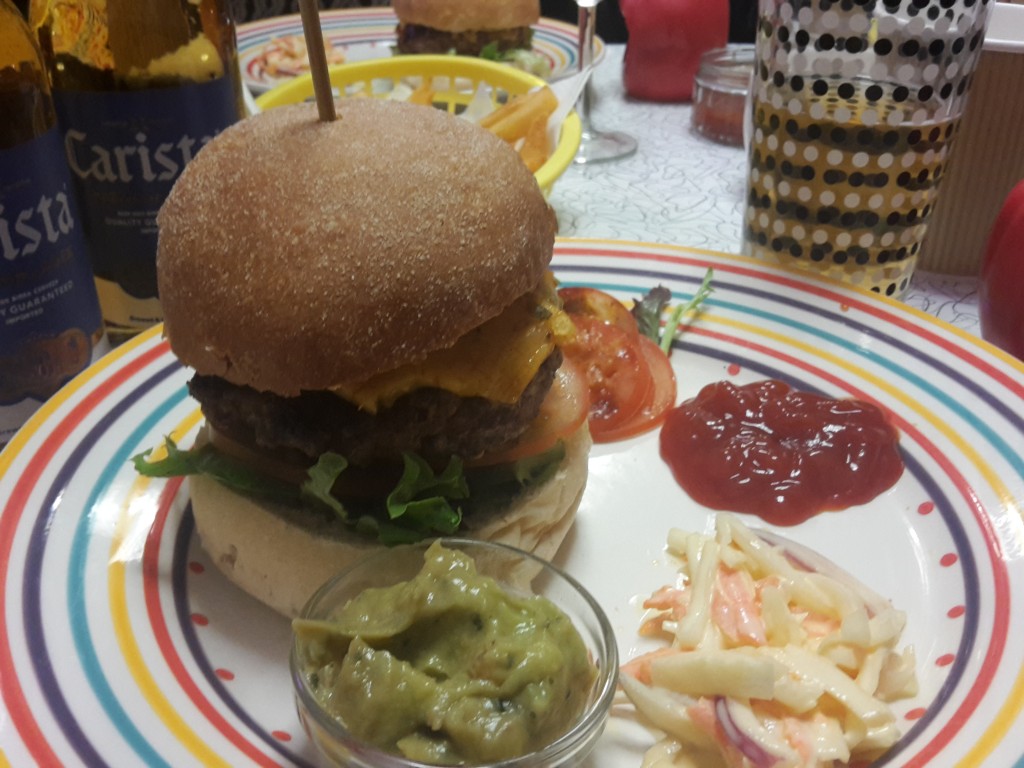 The guacamole was nice and chunky, due to how busy the restaurant we were given a basket of chips to share between two – this was fine with me, the volume of the food was just right (I wouldn’t of wanted a portion of chips to my self)

The beef burger was excellent and the fiery cheese was soothed by the guacamole. I wasn’t particularly impressed by the coleslaw, as it wasn’t crunchy – but apart from that it was completely spot on.

I really enjoyed my meal – after the plates were cleared there was no rushing from staff (Which you’d conventionally get on a Friday night) and we were able to finish the beers we’d bought in before departing.

Overall the food was delicious, the service was on point and the inside of the venue provided a great atmosphere. At below a tenner for a burger and fries with corkage it’s not going to break the bank either.

If you’re a student in Brighton I’d recommend on getting down to this little gem before everyone knows about it!

The meal within this review was paid for by myself, this is not sponsored content and all opinions are my own.

Leave a Reply to Sarah Click here to cancel reply.